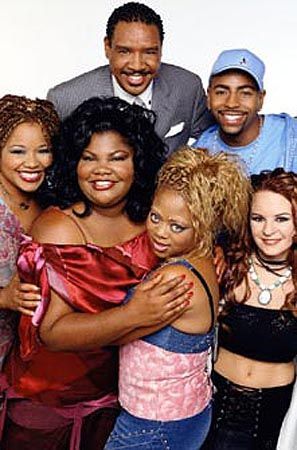 The Parkers is a Comedy Series that aired on UPN from August 30, 1999, to May 10, 2004. A spin-off of Moesha, The Parkers featured the mother-daughter team of Nikki (played by Mo'Nique) and Kim Parker (played by Countess Vaughn).

The series centered around a mother and daughter who both attend Santa Monica College. Nikki was forced to give up her dreams of going to college when she discovered she was pregnant with Kim. After Kim reaches adulthood, Nikki finally decides to go back to school. Kim is initially mortified with this decision, but eventually accepts the situation. Most episodes revolved around Nikki's infatuation with Professor Stanley Oglevee or trying to break up any other potential romance he has.

Unlike Moesha, this show was a straight up sitcom rather than a dramady. And it even managed to reach its natural end unlike its parent series — which ended on a Cliffhanger.

The Parkers provides examples of: