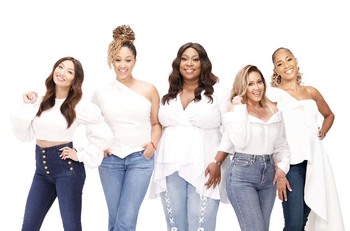 The current panel from left to right: Jeannie Mai, Tamera Mowery-Housely, Loni Love, Adrienne Houghton, and Amanda Seales
The Real is an American syndicated talk show. The series initially received a trial run on Fox-owned markets in the summer of 2013. The series was developed as a talk show designed to appeal to younger female viewers who, like the co-hosts, were experiencing new events in their lives. It was green-lit for national syndication later that fall and officially premiered the following year. The panel consisted of actress Tamera Mowry-Housley from the 1990s sitcom, Sister, Sister; hostess and fashion expert Jeannie Mai; singer and actress Adrienne Houghton, known for being the lead singer in groups 3LW and The Cheetah Girls; comedian and actress Loni Love, known for being the runner-up on Star Search 26 and a panelist on Chelsea Lately and fellow comedian and actress Amanda Seales. The show formerly had R&B singer and television personality, Tamar Braxton, best known for her hit reality series Braxton Family Values as a co-host.

Who's up for some trope naming: