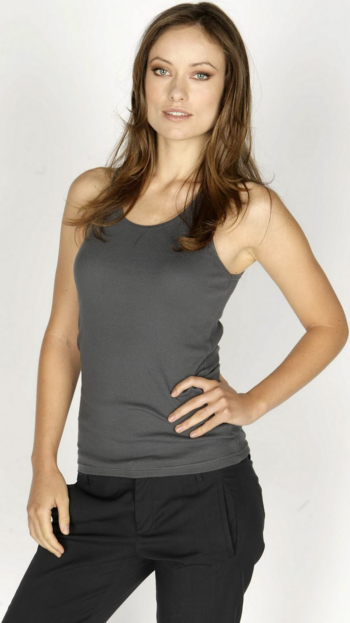 "When you choose to be an actor, you are going against the odds."
Advertisement:

She is known for starring in the TV series The O.C., House and Vinyl, and the films TRON: Legacy, Alpha Dog, Cowboys & Aliens, The Change-Up, The Lazarus Effect and Year One. She had a small role in The Girl Next Door and her. She also wrote and directed a short film called Free Hugs in 2011 and in 2019 she directed her feature-length debut Booksmart. In 2020, she signed on to direct an unannounced film in Sony's Spider-Man Universe.

She is the daughter of Andrew Myles Cockburn, a journalist; her mother, Leslie Cockburn, is an American-born former 60 Minutes producer and who unsuccessfully ran for Congress in Virginia in 2018

. Her uncles, Alexander Cockburn and Patrick Cockburn, also worked as journalists, as have her cousins, Stephanie Flanders and Laura Flanders (daughters of her aunt Claudia Cockburn by Michael Flanders). Her older sister, Chloe Cockburn, is a civil rights attorney in New York; her aunt, Sarah Caudwell, was a writer, and her paternal grandfather, Claud Cockburn, was a novelist and journalist.

As many of her family are writers, and writers with pen names, she lifted the surname of Oscar Wilde to create her current name, and changed it properly while in high school.

She lived in Ireland when she was a child and studied acting at Gaiety School of Acting in Dublin. She has dual citizenship in American and Ireland.

Her parents were friends of Mick Jagger. When Olivia was 4 years old, she was eavesdropping one night on a conversation between diplomat Richard Holbrooke and singer Mick Jagger, until Jagger noticed her and shooed her to bed. She later played one of the leading roles in Vinyl, which Jagger co-created and executive-produced (and whose son, James, is a co-star).