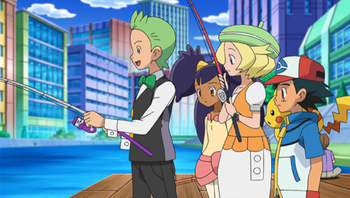 "Gone fishing,
Gone fishing,
It's a sunny old day and you're on your way,
Why don't we all go fishing?''
—Thomas & Friends, "Gone Fishing" music video
Advertisement:

Exactly What It Says on the Tin, a fishing episode will involve the protagonists going fishing.

The fishing trip will often be an excuse for a character to try and bond with their parents.

A variation of this episode may have a character trying to catch a legendary fish that nobody has been able to catch. They may eventually finally catch the fish, only to inevitably let it go.

Compare Fishing Minigame, for when this trope is used in video games, and Camping Episode, which revolves around another typical outdoor activity. In fact, it's not uncommon for people to go fishing while camping.

Also compare Heroes Gone Fishing, for when a hero does a relaxing activity (such as fishing) to take a break from crime-fighting.

After (unknowingly) purchasing Crack Cocaine, Hank Hill uses it as bait for fishing to up his game.

After (unknowingly) purchasing Crack Cocaine, Hank Hill uses it as bait for fishing to up his game.