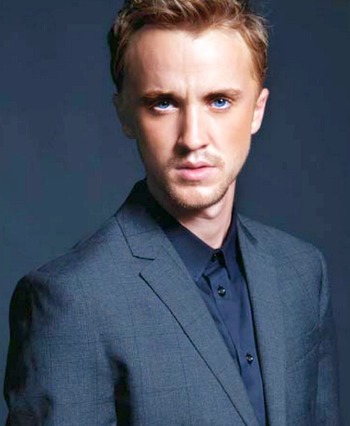 My father will hear about this!
"It's definitely more fun playing a bad guy. It feels a lot better than playing one of the good guys."
Advertisement:

Thomas Andrew "Tom" Felton (born 22 September 1987) is the British actor known for playing Draco Malfoy in all eight Harry Potter films. He is the original Draco in Leather Pants, inspiring many a Fangirl to sigh over the richest bad boy in Hogwarts.

Felton is one of the young actors in Harry Potter who actually acted professionally prior to the series, starting off in commercials at the age of eight. His first film role was a major supporting part in the 1997 version of The Borrowers (1997), in which he played an Annoying Younger Sibling to Arrietty Clock. A couple years later he played Jodie Foster's son in Anna and the King. When Harry Potter rolled around, he originally auditioned for the part of Harry and, failing that, went for Ron before finally ending up as Draco. For most of the series, Malfoy was a two-dimensional cowardly bully, but in Half-Blood Prince he joins the ranks of Voldemort's followers and learns the hard way that Evil Is Not a Toy. This gave Felton a chance to show that He Really Can Act.

In 2011, Felton appeared in Rise of the Planet of the Apes in a role not too far removed from Draco. It remains to be seen how Type Cast he is, though Felton has said he enjoys playing evil and won't mind if he spends the rest of his career playing villains.