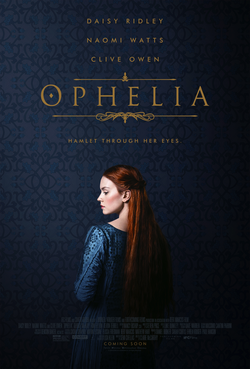 "Doubt truth to be a liar, but never doubt I love."
"You may think you know my story. Many have told it. It has long passed into history...into myth. I have seen more of heaven and hell than most people dream of. But I was always a willful girl, and followed my heart and spoke my mind. And it is high time I should tell you my story for myself."
— Ophelia
Advertisement:

A 2018note  it premiered in 2018, but didn't receive a wider release until 2019 British-American romantic period drama film, based on the novel of the same name by Lisa Klein. It is a reimagining of William Shakespeare's Hamlet told from the perspective of Ophelia, Prince Hamlet's ill-fated love interest.

In medieval Denmark, young Ophelia is Queen Gertrude's favorite lady-in-waiting, but is regarded as an outsider at court for her common-born status and other perceived oddities. She struggles to fit in while the queen leans on her for emotional support, plagued by insecurities around her love life and self-image. In the midst of all this, Ophelia catches the eye of Gertrude's son, Prince Hamlet, and in spite of their difference in station a romance blossoms between them. However, the court is thrown into turmoil when the king dies unexpectedly and Hamlet's scheming uncle Claudius swiftly ascends the throne, also taking a besotted Gertrude as his wife. With Hamlet growing increasingly suspicious of Claudius and sinister forces closing in on them, Ophelia tries to stand by her beloved prince but begins to realize this may come at a terrible price.

The film was directed by Claire McCarthy, while the screenplay was written by Semi Chellas, and stars Daisy Ridley as Ophelia, Naomi Watts as Gertrude and Mechtild, George MacKay as Hamlet, Clive Owen as Claudius, Devon Terrell as Horatio and Tom Felton as Laertes.

If you're looking for the trope named after Ophelia, see here.

NOTE: Seeing as Hamlet is centuries old and in the Public Domain, and having at least a basic understanding of the plot is more-or-less required for this film, all spoilers exclusive to Hamlet are unmarked.