Film / Anna and the King 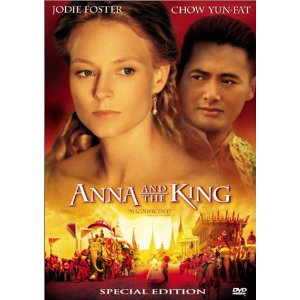 It is always surprising how small a part of life is taken up by meaningful moments. Most often they are over before they start although they cast a light on the future and make the person who originated them unforgettable. Anna had shined such a light on Siam.

Anna and the King is a 1999 adaptation of the 1944 novel Anna And The King Of Siam, a fictionalized account of Anna Leonowens' articles (pretty fictionalized themselves) of her time in Siam. It has elements of both the 1946 non-musical film with Irene Dunne and Rex Harrison, and the Rogers and Hammerstein musical. The film starred Jodie Foster as Anna, Chow Yun-fat as the King, and Tom Felton as Louis Leonowens.

Anna Leonowens is a young, British widow in the 1860s who moves to Siam to serve as tutor to the king's fifty-eight children. The king hopes to raise his heirs with a sense of globalism and a knowledge of the modern world outside of Siam. Anna struggles to balance teaching modern world views while respecting Siamese tradition.

See also: The King and I.