Film / Harry Potter and the Chamber of Secrets 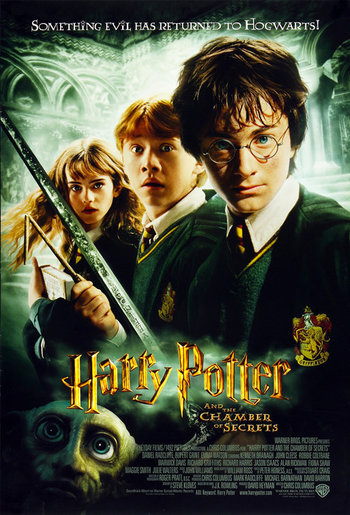 THE CHAMBER HAS BEEN OPENED.
ENEMIES OF THE HEIR BEWARE.
"Now according to legend, Slytherin had built a hidden chamber in this castle, known as the Chamber of Secrets. Though shortly before departing, he sealed it... until that time when his own true heir returned to the school. The heir alone would be able to open the chamber and unleash the horror within, and by so doing, purge the school of all those who, in Slytherin's view, were unworthy to study magic."
— Professor Minerva McGonagall
Advertisement:

Harry Potter and the Chamber of Secrets is the second film in the Harry Potter film series, directed like the first one by Chris Columbus, and released in 2002.

The main plot involves the "Chamber of Secrets" being opened at Hogwarts, a hidden chamber built by Salazar Slytherin, one of the founders of Hogwarts. A big fan of Fantastic Racism, Slytherin built the Chamber to house a monster which can only be controlled by his heir and which is intended to attack all those Muggle-borns "unworthy to study magic." Now, someone has opened the Chamber, implying the Heir of Slytherin has returned to Hogwarts, but who is it?

The tone is very similar to that of the previous movie, but to some it came off as feeling a little more bloated and less spirited. Others focus on the film's highlights — its high faithfulness to the book, and Kenneth Branagh's inspired turn as Gilderoy Lockhart.

Followed by Harry's third year at Hogwarts, in Harry Potter and the Prisoner of Azkaban.

Harry Potter and the Chamber of Secrets contains examples of:

Lucius: Well... let us hope that Mr. Potter will always be around to save the day.
Harry: Don't worry. I will be.
Feedback

Example of:
The Phoenix