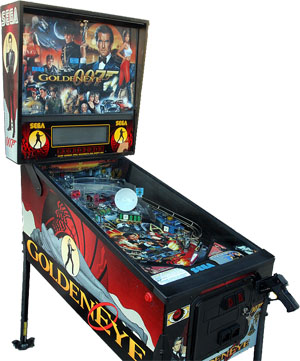 Ourumov: "What are you doing?!"
Advertisement:

GoldenEye note or "James Bond, Golden Eye, The Pinball", according to the official

is a Licensed Pinball Table released in 1996 by Sega Pinball. It was designed by Ward Pemberton, with visuals by longtime pinball artist Paul Faris.

As the title indicates, this game is based on the 1995 James Bond movie starring Pierce Brosnan. As Bond, the player must stop the international terrorist Janus from using the old Soviet GoldenEye satellite to destroy London's financial markets. Opposing him are the sexy but deadly Xenia Onatopp, the Soviet Colonel General Arkady Ourumov, and Janus himself. Infiltrate a Soviet nerve gas plant, engage in shootouts with guards, hack Janus' computers, detonate Q's exploding pen, then pop up the jump ramp to capture a pinball in the satellite dish. Complete all five 007 Encounters, and you might be able to activate GoldenEye itself for a five-ball scoring frenzy.