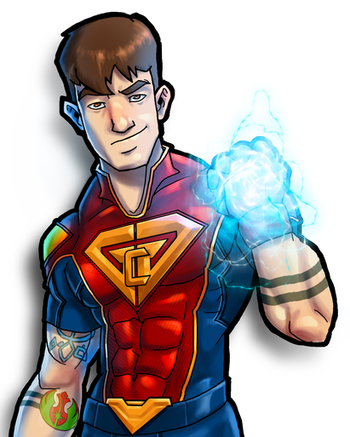 ◊
I'm in love with a hero
I'm in love with the one who will always win
He's a prominent figure
In the gay comic geeky world I'm in
I know I'm safe from the villain's plan
In the arms of my mutant muscle man
He's always there in the nick of time
His big, bold heart is mine!
— opening theme song

Paul Charles is the Gay Comic Geek, a self-described dork who loves comic books, Transformers, collectable figurines, sci-fi and fantasy movies, Anime, American cartoons, and anything else that could be considered geeky. He also just so happens to be gay.

As the Gay Comic Geek, Paul reviews things associated with geek subculture, giving his overall opinion and providing his own unique gay perspective. Not everything he reviews deals with gay subject matter, though he does bring up gay films, novels, and TV series frequently, as well as gay-themed adult comics. Since his debut in 2008, he has gained a steady rise in popularity on YouTube with his primary channel found here

The Gay Geeky Vlogs channel was started as a means of bringing to light things that Paul has an interest in but don't directly involve comic books, as well as talk about things going on in his life.

A unique thing concerning the Gay Comic Geek is that his reviews are largely unscripted, and do not involve him portraying a fictional character. Paul has said during interviews that he considered making his videos this way, but ultimately decided against it, wanting to gain merit by being himself. Because of his rise in popularity, Paul has been interviewed several times and now works alongside four other gay YouTube channel owners in a group project called A Gay Colab, found here.