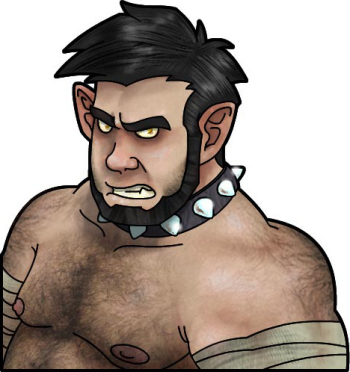 Becoming this badass was quite the journey for our eponymous "hero".
Advertisement:

Grant is an ongoing gay Werewolf Webcomic by CaptainGerBear. It is the backstory of his signature werewolf character, Grant, starting with the character's childhood, having been abandoned at birth and raised in an orphanage. The story continues as Grant, in his early teens, is finally adopted by a kindly couple. As a young adult, Grant strikes out on his own and finds himself treading an oftentimes difficult road of self-discovery — dealing with his werewolf nature, exploring his attraction to other men, and experiencing the joys of love and the agonizing pain of loss.

So far Grant is 66 pages long, with extremely irregular updates (sometimes going years between new pages), but has already accumulated a modest fandom. It can be read from the first page here,

. All NSFW pages require site membership and enabling of mature content to view, so this page may have links to NSFW content if you've already got an account. It should be noted that while Grant has a hard R-rating and presents a number of sexy moments it is not outright pornography. The creator has even gone on record saying that his goal for the comic is to tell a good story for mature audiences — the eroticism is an afterthought.