Webcomic / Go Get a Roomie! 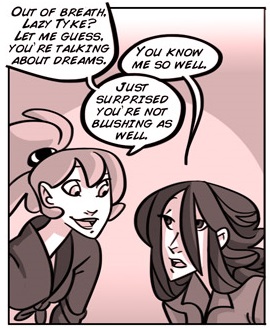 Roomie and Lillian.
Go Get a Roomie! is a comedic webcomic centered around the wacky hijinx of the eponymous Roomie and her friends and ran from May 8, 2010 until Christmas day (December 25th), 2020. These mainly consist of a gaggle of girls whom she has slept with as payment for letting her sleep over at their place — thus her nickname. Other recurring cast members include her favorite bartender, fraternal twins named Richard and Ramona (a sub and a dom, respectively), and Matt, a rather confused vanilla guy who can only look on in mild horror at her lifestyle. Soon she meets the introverted, nigh-perpetually-slumbering Lillian, or "Lazy Tyke" as Roomie likes to call her, who is far more at home in her dreamscapes and imagination than in the waking world. Lillian, who loves sleep but is utterly unconcerned with the idea of sleeping with anyone, is perhaps the one person who has no designs upon Roomie — and, of course, Roomie becomes fascinated with her. Despite LT's halfhearted protestations, Roomie ends up becoming her steady roommate — and just as unusual for the restless Roomie as this extended period of consistent lodging, is the break in her pattern of omni-amorous unattachment. What follows is a romance of sorts as they grow closer together, and a study of the character features and flaws which have resulted in their deeply unique, and often heartwarming, personalities.
Advertisement:

The comic is definitely NSFW: a running gag involves Roomie's aversion to clothes, in keeping with her decidedly hippie value set. It was initially published on DeviantArt by batlesbo (formally nana-51) in a folder of her gallery

but was eventually moved onto its own website. Since the current strip (and hence the main page) may be NSFW, here is the first

Has nothing to do with a musician YouTuber also named Roomie.