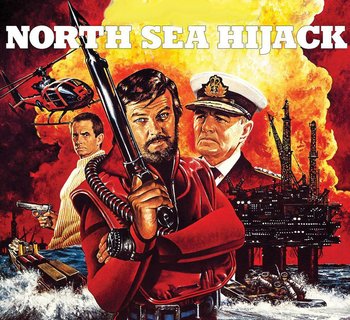 North Sea Hijack is a 1979 British action thriller film directed by Andrew V. McLaglen, starring Roger Moore, James Mason, and Anthony Perkins. It is based on the novel Esther, Ruth and Jennifer by Jack Davies. The film has been re-issued under several other titles: North Sea Hijack was the original British title, but the film was issued internationally as ffolkes and later shown on TV as Assault Force. Trailers for the original U.S. theatrical release included the tagline "He doesn't need a licence to kill", referring to Roger Moore's most famous role, though the role he plays here is vastly different.

Moore portrays Rufus Excalibur ffolkes (yes, with two lower case f's; it's still pronounced "folks"), an eccentric veteran of the Royal Navy turned freelance counter-terrorism consultant who specializes in amphibian missions and trains a commando of frogmen. When terrorists seize two oil platforms and a cargo in the North Sea, ffolkes and his team are recruited to come up with an anti-terrorist assault plan. The terrorist group is led by a man calling himself Lou Kramer, who demands a ransom in exchange for not blowing up the platforms and the cargo within 24 hours. The rest of the film follows ffolkes's plan coming into fruition bit by bit.