This page contains unmarked spoilers for Jay and Silent Bob Strike Back. You Have Been Warned. 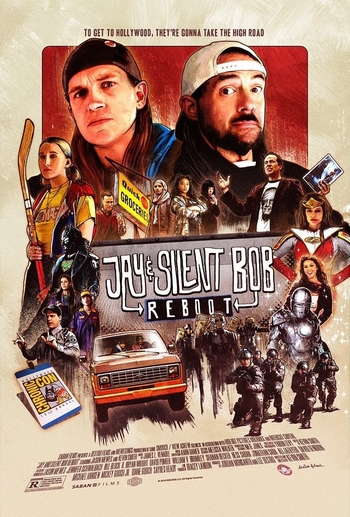 Jay and Silent Bob Reboot (yes, that's the actual title) is the 2019 sequel to 2001's Jay and Silent Bob Strike Back, written and directed by Kevin Smith and distributed by Saban Films. It's both the second sequel to a film in and the first installment of The View Askewniverse after Clerks II.

In 2001, two stoneheaded best friends, potty-mouthed Jay (Jason Mewes) and the aptly named Silent Bob (Smith) found out a comic book based on themselves, Bluntman and Chronic, was getting a movie. But because of that movie, they were getting trolled by the Internet, so the two went off to Hollywood to stop the production.

The movie got made, but Jay and Silent Bob were compensated for their troubles with the money from the royalties they were owed anyway... which was plenty for them to buy enough plane tickets to go door-to-door and literally pound the shit out of all the internet trolls.

18 years later, comic book movies have come back with a vengeance. So when Jay and Silent Bob find out Bluntman and Chronic is getting the reboot treatment, and Saban Films tricked them into giving the rights to their names away, the older and wiser (but mostly older) duo must embark on another quest to Hollywood. Hilarity Ensues yet again as they must contend with more abnormalities like a brand-new bad girl gang and the news of one of them being a father!

The film was released on October 15, 2019, for the first of two nationwide Fathom Events screenings, preceding a touring presentation by Smith and Mewes.

This film reboots examples of: