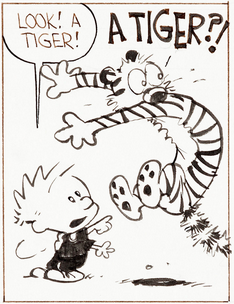 Dated humor trope. Simply put, a rather innocent member of a usually monstrous species walks into the room. Everyone screams, points, and shouts "Monster!" Said character, not realizing that they are the monster, goes "Where?! Where?!" while looking around for it. These days if it's used at all in serious works, the monster is more likely to be snarking.
Advertisement:

Related to Answers to the Name of God, Tomato in the Mirror, and Duck!.

Alternative Title(s): A Monster Where