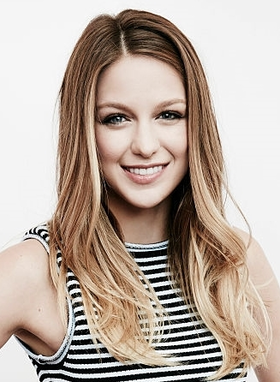 "Presently, I wear a cape for a living."
— Her current Twitter description
Advertisement:

Melissa Marie Benoist (born October 4, 1988 in Houston, Texas) is an American actress and singer. She's perhaps best known for her roles on Glee and Supergirl.

Just in case you're wondering, her last name is French, so it should be pronounced 'ben-wah' according to her. Her family just chooses to say "ben-oyst" instead (they use the Anglicized version).

She married her Glee co-star Blake Jenner in 2015 but divorced him two years later. Following it, she shared her experiences of being a domestic abuse survivor

, in a veiled jab at Jenner (he later confirmed this

). On September 1, 2019, she married her Supergirl co-star Chris Wood, and on September 25, 2020, both announced on social media that Melissa had given birth to their first child, a son named Huxley.