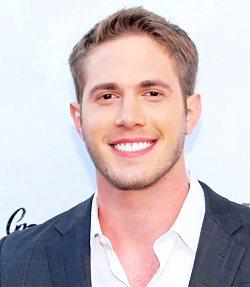 Blake Alexander Jenner (born August 27, 1992 in Miami, Florida) is an American actor and singer. He got his start on The Glee Project, which landed him the role of Ryder Lynn on Glee's fourth season. Since then he has had supporting roles in notable films like The Edge of Seventeen and Everybody Wants Some!!, as well as a role on the neo-noir crime series What If.
Advertisement:

Jenner was married to his Glee costar Melissa Benoist for a few years before they split in 2017. No relation to that famous clan of Jenners.