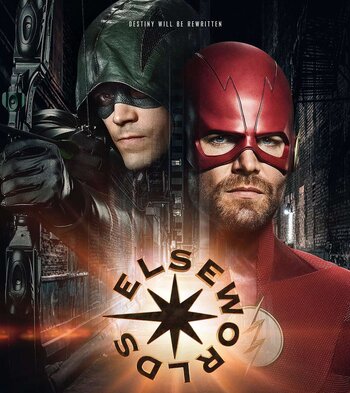 Barry: Mar Novu, you're gonna stand down!
Oliver: You're gonna use that book to help us set reality right!
The Monitor: Well, I certainly wouldn't have placed it in Deegan's hands if that were my intent.
The Flash of Earth-90: Enough! You will not do to this Earth what you did to mine!
Advertisement:

Elseworlds is a 2018 television serial, and the Arrowverse's fifth annual crisis crossover, told across episodes of The Flash, Arrow, and Supergirl, starting December 9th and concluding on the 11th.

A reality-bending experiment by Dr. John Deegan (Jeremy Davies), a doctor from Gotham City's Arkham Asylum, causes Oliver Queen, aka the Green Arrow (Stephen Amell), and Barry Allen, aka the Flash (Grant Gustin), to involuntarily swap lives and identities. With the help of Kara Danvers, aka Supergirl (Melissa Benoist), the only person who recognizes the switch, Oliver and Barry have to embrace the other's abilities, assemble a team of heroes from across The Multiverse and set things right.

"Elseworlds" introduced Batwoman (Ruby Rose) and Gotham City — a first for the Arrowverse— as well as Lois Lane (Elizabeth Tulloch), Nora Fries (Cassandra Jean Amell) and The Monitor (LaMonica Garrett), while Superman (Tyler Hoechlin) returned for his first appearance in an Arrowverse crossover. In a very surprising twist, John Wesley Shipp's Barry Allen also showed up. The crossover set up Batwoman's own series.

To see the DC Comics Imprint of the same name, see here.

Elseworlds consists of three episodes broadcast from December 9 to December 11, 2018.

"Don't worry, Doctor. Everything is as it should be. The stage is set. Worlds will live. Worlds will die. And the universe will never be the same."
Feedback