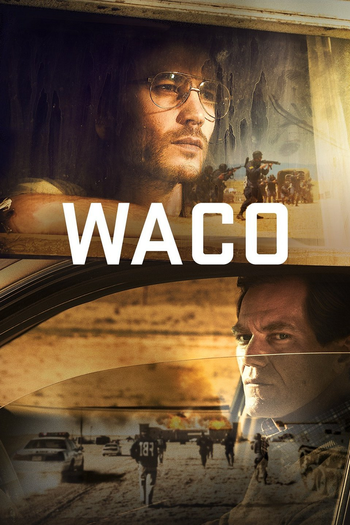 "This is our time to prove through suffering that we are worthy of the miracle that's to come. The Kingdom of Heaven is coming, I promise you."
"There's a paradox to power. The more force you bring to a situation, the more likely you are to meet resistance."
— Gary Noesner
Advertisement:

Waco is a six-episode miniseries broadcast on the Paramount Network in January 2018.

Based on two books that depict the 1993 Waco standoff, A Place Called Waco by David Thibodeau and Leon Whiteson, and Stalling for Time: My Life as an FBI Hostage Negotiator by Gary Noesner, the series dramatizes the real-life 51-day siege by the FBI and the ATF on Mount Carmel, Waco, Texas. Said ranch is the headquarters of the Branch Davidians, a right-wing religious group fixated on the seven seals mentioned in the Book of Revelation and convinced that their charismatic leader David Koresh is the next Messiah. Tensions between the government agencies and the Branch Davidians slowly escalate in the coming weeks, leading to an infamously fatal fire.

"This is no longer a situation, Gary. It's a symbol."