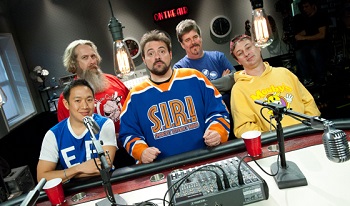 Comic Book Men is a Reality TV show on AMC about Kevin Smith's comic book shop, Jay and Silent Bob's Secret Stash. The show uses a combination of following the cast around with the going-ons in the store, and podcast style commentary about the going-ons with the cast, and host Kevin Smith. The shop itself is named after Jay and Silent Bob, two recurring characters in Smith's films set in The View Askewniverse.

The series premiered on February 12, 2012, with its first season of six hour-long episodes. With season two, the show shifted to half-hour episodes. The show ended after its seventh season finished airing in April 2018.