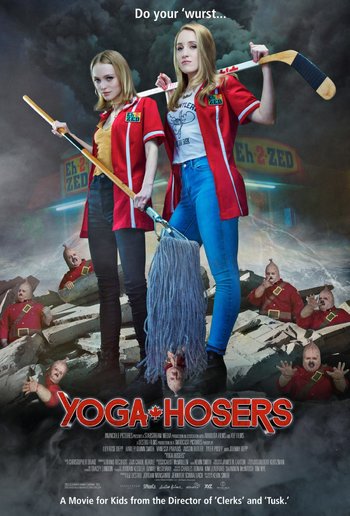 "A movie for kids from the director of Clerks and Tusk."
— Tagline
Advertisement:

Yoga Hosers is a 2016 comedy horror film by Kevin Smith, the second in his "True North" trilogy. It stars Smith's daughter Harley Quinn Smith and Lily-Rose Depp, reprising their roles from Tusk.

Childhood friends Colleen Collette (Depp) and Colleen McKenzie (Smith) are two average 15-year-old girls from Winnipeg. In between high school, doing Yoga, playing in a rock band and burying their noses in their phones, the two work at the Eh-2-Zed convenience store, which is owned by Colleen C's divorcee father.

One night during their shift Colleen M's crush Hunter Calloway (Austin Butler) invites the girls to a Grade-12 party, but after Colleen C's father takes off for an impromptu trip to Niagra Falls with his girlfriend, leaving the girls to mind the store while he's gone, they invite Hunter to bring the party there instead. As it turns out, Hunter and his friend Gordon (Tyler Posey) are Satanists, hoping to get the Colleens alone to sacrifice them. However, once they arrive, the store is overrun with Bratzis - foot-tall monsters made from bratwurst who resemble Nazis - who kill the two boys, after which the Colleens destroy them with their yoga skills.

After getting arrested for the murders of Hunter and Gordon, the girls are interrogated by man-hunter Guy Lapointe (Johnny Depp), who informs the girls that the Bratzis are the work of, and may lead him to, the notorious Andronicus Arcane, former right hand man to the self-proclaimed "Canadian Führer" Adrien Arcand. As the girls had learned from their most recent history class, Arcand briefly held influence in Winnipeg before his arrest, after which Arcane disappeared and was never heard from again. Lapointe sneaks the Colleens out of the police station to help investigate, and the three soon discover something sinister that's been living under the Eh-2-Zed for the last 70 years.