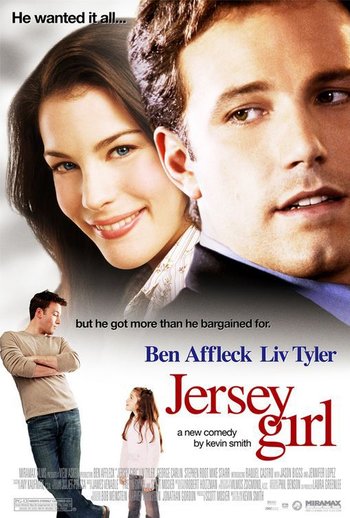 This 2004 comedy-drama was Kevin Smith’s first foray into more traditional Hollywood filmmaking, as well as his first film to be set outside of The View Askewniverse.

Ollie (Ben Affleck) is a workaholic music publicist living comfortably in New York City whose wife Gertrude (Jennifer Lopez) tragically dies in childbirth. His responsibility for his newborn daughter eventually costs him his job, forcing him to move into his father’s (George Carlin) house in New Jersey. From then on, it’s the story of Ollie’s shaky attempts to raise his daughter, whom he named after her mother, as a single parent, all while deciding whether or not to return to the ritzy life in New York with her. Ollie also finds himself getting involved with a sexy video-store clerk named Maya (Liv Tyler).

"I hate you right back you little shit! You and your mom took my life away from me! I just want it back!"

"I hate you right back you little shit! You and your mom took my life away from me! I just want it back!"