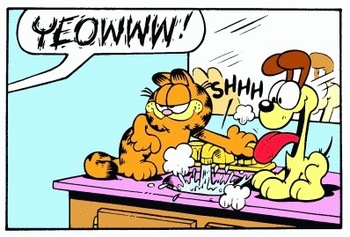 "... a propensity, while in use, to turn instantly beastly hot or blindingly cold upon you, depending on whether your neighbor turned on his cold or his hot to deprive you of a necessary complement in the shower you had so carefully blended."
— Lolita, by Vladimir Nabokov
Advertisement:

Bob flushes the toilet while Alice is in the shower. Alice screams and curses, unprepared for the sudden increase in water temperature. Or perhaps Alice turns on the washing machine while Bob is in the shower, causing Bob to experience a precipitous drop in water temperature. Can be done deliberately or by accident, but the result is still funny — provided it's not happening to you. Can also be done by turning on a faucet elsewhere in the house, which has the advantage of not prematurely giving away the game if you are deliberately pranking someone. Usually deployed as a comedy trope, often accompanied by a quick shot of the Oh, Crap! expression on Alice's face when she hears the unmistakable sound of a toilet flushing.

Truth in Television as most shower valves mix hot and cold water to achieve the desired temperature so anything that diverts either hot or cold water will result in a sharp temperature shift in the opposite direction. Note that this was always a regional trope as it depends upon the central water heater practice common in non-tropical Western plumbing design but not always found in other cultures. Rapidly becoming a bit of a Discredited Trope in Real Life since the introduction of pressure-balanced shower valves specifically designed to prevent this from happening - the worst that's likely to happen is that the shower's water flow temporarily drops. Such "anti-scald" shower valves are even required by law in some places, especially in commercial buildings like apartments, hotels, and dormitories. Nevertheless, if you have the (mis)fortune of being in a house or building with old plumbing, this trope is still doable.

The normally-aquaphobic Stitch runs into the shower to avoid being taken to the animal shelter where Lilo adopted him so he can get his shots, as he's also afraid of needles. So she flushes the toilet to get him to jump straight out of the tub.

The normally-aquaphobic Stitch runs into the shower to avoid being taken to the animal shelter where Lilo adopted him so he can get his shots, as he's also afraid of needles. So she flushes the toilet to get him to jump straight out of the tub.