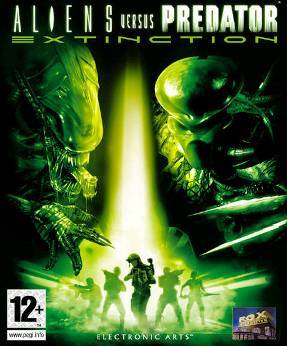 Aliens Versus Predator: Extinction is a 2003 console exclusive Real-Time Strategy game developed by EA Games, marking a significant departure from most games in the Alien vs. Predator franchise. Rather than play directly as a single Alien, Predator, or Colonial Marine, you instead command groups of them as they engage in a war for dominance.

Weyland-Yutani and the Colonial Marines have jointly founded a mining colony on the wild planet of LV-742, but things quickly get out of control when the colonists accidentally unearth secret caches of Alien eggs. As Xenomorph hives emerge across the globe, a clan of Predators arrives seeking bloodsport and valuable trophies. The planet is quickly engulfed in a Mêlée à Trois, which is only complicated further once Weyland-Yutani starts taking an interest in both savage alien races...