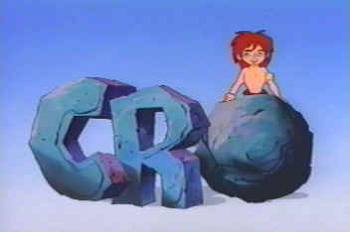 An educational/informative show from the Children's Television Workshop and Film Roman about mechanical engineering and technology. It was based on a children's technology book called The Way Things Work by David Macaulay. The show ran from September 1993 to October 1994 on ABC for 20 episodes. The show was also aired on some PBS affiliates (such as KTCA-TV 17 in Minneapolis/St. Paul).
Advertisement:

The premise: A mammoth from the ice age is frozen in a glacier, and thawed out by a scientist and her kid sidekick. The mammoth, named Phil, can speak perfect English and comes from a surprisingly sophisticated tribe of mammoth scientist/engineers. Each episode, Dr C. and Mike would, in a cold open, encounter a tricky engineering problem with some device, and Phil would tell a story about solving the same problem years ago. Cue titles, then a Flash Back.

The titular Cro was a young human boy (presumably a Cro-Magnon man), whose adopted Neanderthal family was assimilated into the mammoth community. Although the humans were, for the most part, pretty stupid, the mammoths found their opposable thumbs useful.

Each Flash Back would have the mammoths coach Cro and his Neanderthal family through the solving of a problem with some type of simple machine. It differed from the typical Bamboo Technology in that all the devices were built on a foundation of good solid science.

The theme song to the short-lived animated series "Cro", which tells us about who our title character is, as well as how his woolly mammoth friend made it all the way to the 1990s.

The theme song to the short-lived animated series "Cro", which tells us about who our title character is, as well as how his woolly mammoth friend made it all the way to the 1990s.