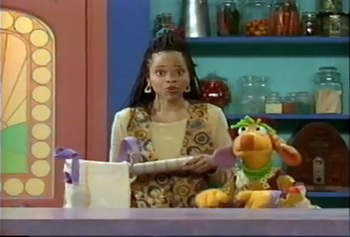 Big Bag was a puppet show, with some animated inserts, produced jointly by Cartoon Network and the Children's Television Workshop. It ran on Cartoon Network from June 1996 to September 1998, and aired reruns until September 2000.

The show featured new Muppet characters built by Jim Henson's Muppet Workshop. The main characters were Chelli, a Muppet patchwork dog, and Molly, his human friend, all of whom live and work in a general store. They were assisted by Bag, an actual canvas bag. Also working in their store were two anthropomorphic socks, Lyle and Argyle. The second season introduced another new Muppet character, Sofie.

Animated segments showcased included "Troubles the Cat," "Koki," "William's Wish Wellingtons," "Slim Pig," "Tobias Totz and his Lion," "Samuel and Nina" (the latter four exclusive to the first season) and "Ace and Avery" (this one exclusive to the second season.)

The Muppet Wiki has more information

, along with on The Lost Media Wiki

Not to be confused with Big Bad.