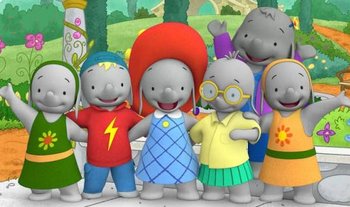 Ella the Elephant is a short-lived 2013 3D-animated (with hand-drawn backgrounds) Canadian kids' cartoon based on a series of books by Carmela D' Amico and Steven Henry. It was produced by DHX Cookie Jar Inc. (the former Cookie Jar Entertainment until its acquisition by WildBrain) in association with TVOntario, Disney Junior, and Fremantle Media, with animation provided by Atomic Cartoons.

Taking place on Elephant Island, the series follows the adventures of a spirited little girl elephant named Ella, who possesses a big heart, a vivid imagination, and a magic transforming hat. Alongside her circle of friends, Frankie, Belinda, and Tiki, Ella always finds adventures to go on or problems to solve around the island. But with ingenuity, determination, teamwork, and a touch of magic, Ella and her friends work to make every tricky situation they get into work out in the end.

The show only lasted a season, with its last episode airing in early 2014. Ella's voice actor, Addison Holley, as recently gone on to star in the new Disney Junior series PJ Masks.

Ella the Elephant provides examples for: