Film / Some Kind of Wonderful 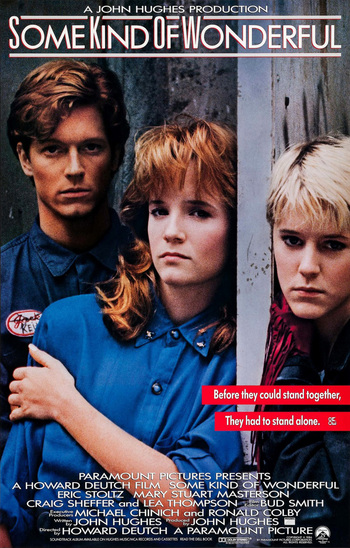 Before they could stand together, they had to stand alone.
"It's not a great movie. It progresses slowly at times and it uses some fairly standard characters. But it is not about whether the hero will get the girl. It is about whether the hero should get the girl, and when was the last time you saw a movie that even knew that could be the question?"
—Roger Ebert's review

A 1987 romantic teen dramedy written by John Hughes and directed by Howard Deutch, Some Kind of Wonderful was the last of Hughes's six acclaimed teen films in The '80s.

The protagonist, Keith (Eric Stoltz), is a working-class student who's in love with popular girl Amanda Jones (Lea Thompson). Meanwhile, his tomboyish best friend Watts (Mary Stuart Masterson) is in love with him, but Keith doesn't notice that. When Keith asks Amanda out right after she breaks up with her jerkass boyfriend Hardy (Craig Sheffer), she says yes, mainly out of spite. Watts's jealousy causes conflict between her and Keith, but they reconcile, and Watts agrees to chauffeur Keith to his date. At first, Keith and Amanda hit it off, but when Keith comes to realize that he loves Watts, Amanda tells him to go to her, and they get together.

The film is similar to Hughes and Deutch's previous collaboration Pretty in Pink, with genders switched and the ending changed. Some Kind of Wonderful had a surprisingly good (but hard-to-find) young-adult novelization that really fleshed out the characters.