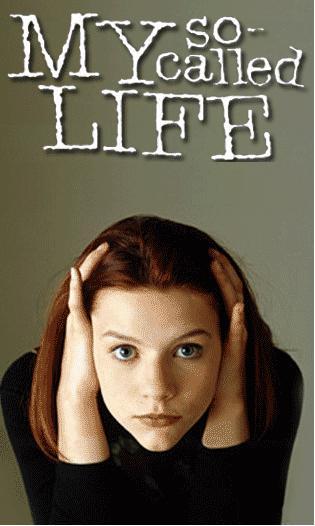 An American television Teen Drama, created by Winnie Holzman and produced by Edward Zwick and Marshall Herskovitz as a Spiritual Successor to their critically acclaimed dramedy thirtysomething. This show about an angsty high school student, Angela Chase (played by Claire Danes), like, really spoke to those of us who were teenagers when it aired.

Originally broadcast on ABC from August 25, 1994, to January 26, 1995, My So-Called Life is set at the fictional Liberty High School, in a suburb of Pittsburgh. It follows the emotional travails of several self-aware teenagers. This critical darling — all of nineteen episodes — ended with a cliffhanger.

A typical episode featured an A-plot about Angela and a B-plot about her parents Patty and Graham.

The A-plot was usually based on one of two story arcs. One arc was about how Angela is torn between two groups of friends: the goody-two-shoes kids she always used to hang out with (most notably Brian and Sharon), versus the trouble-making girl Rayanne and Rickie, the effeminate Puerto Rican boy who served as her sidekick. The other arc was about Angela's obsession with the hot kid Jordan Catalano, who barely knew she was alive. Ironically, Jordan Catalano was originally supposed to only be in the show for one episode, but the producers liked actor Jared Leto so much that they made Angela's crush on him into Story Arc.

One of the most bleakly funny shows ever aired, it showed how much bitterness can result from a completely ordinary day at high school where nothing in particular goes wrong. Often the show took a comic plot (usually A Simple Plan) and subverted it by playing it for drama (and, arguably, realism) rather than for humor — and this was both much funnier and much more painful than it would have been as a comedy.

Also notable for dealing with "hot topics" with relatively little melodrama. Rayanne episodes often involved guns, drugs, etc. but didn't have Angela instantly get involved and ruin her life, as would happen on almost any other Teen Drama.

Compare Freaks and Geeks, another beloved coming-of-age series that faced a premature cancellation.

Angela has a dream where she tries to follow Jordan, but finds her feet stuck to the floor.

Angela has a dream where she tries to follow Jordan, but finds her feet stuck to the floor.