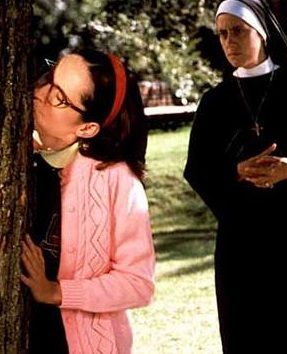 The Kissing Warm-Up is when a character practices their smooching skills alone. It mostly occurs with young characters who have not had their First Kiss. It may involve kissing your hand, the mirror, a stuffed animal, a live animal, or anything handy.

Frequently occurs in anticipation of a make-out party. Can turn into Cringe Comedy if another character catches them in the act.

If the kissing warm up is with a living person, it's a Practice Kiss. If the kiss is with a live animal who is sapient, you may be looking for Interspecies Romance.

Compare Test Kiss. Not to be confused with I Kiss Your Hand.