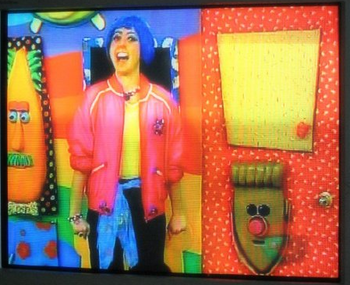 Book Girl in her colorful world.
"Hi! I’m Book Girl, and this is my special book. And I want it to be your special book too! So come on in..."
— Book Girl in the beginning of each episode
Advertisement:

My Special Book is a Canadian series that aired 90 episodes on Treehouse TV and YTV Jr. from 2000 to 2006 (although the entire show was produced in 1998, it did not air until 2000). Each episode begins with a shot of a boy in bed which then pans past his bed and stuffed animals to a book titled My Special Book sitting on a shelf. Book Girl then appears from behind the book and opens it up to reveal her colorful world. Book Girl tells a story to the audience and then closes the book at the end.

The show became almost impossible to find since it's been taken off of the air due to a lack of home media releases. However, in late 2020, a large cache of episodes was found and uploaded online.

My Special Book provides examples of: