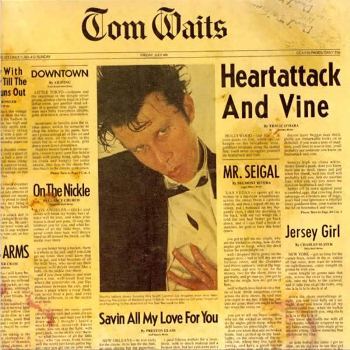 The morning light has washed your face, and everything is turning blue now.
Advertisement:

Heartattack and Vine is a 1980 album by Tom Waits. It's best remembered for the fan favorites "Jersey Girl", "Ruby's Arms" and the title track. At the time it was his best-selling album up to that point.

It would be his final album for the label Asylum and symbolically end the first period of his career, where his music mostly evoked a "drunk pianist in a jazzy nightclub atmosphere". After this album Waits moved to another label, while his music changed into a style more akin to Avant-garde Music / Alternative Rock with the New Sound Album Swordfishtrombones (1983).