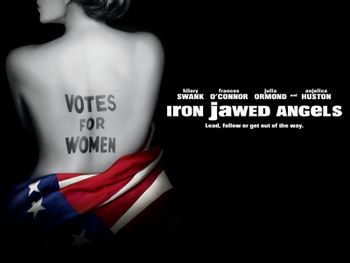 Suffrage has never been so sexy.
"We're legitimate citizens. We're taxed without representation. We're not allowed to serve on juries so we're not tried by our peers. It's unconscionable, not to mention unconstitutional. We don't make the laws but we have to obey them like children."
— Alice Paul
Advertisement:

Iron Jawed Angels is a 2004 Made-for-TV Movie produced by HBO, detailing the tail end of the American campaign for women's suffrage.