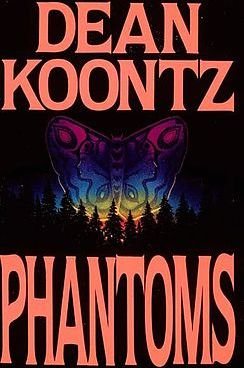 Phantoms is a 1983 horror novel by American author Dean Koontz. It takes place in the small Californian mountain town of Snowfield, where doctor Jennifer Paige is taking her younger sister Lisa to live after their mother died of an embolism. It's a picturesque little place, but it doesn't take the sisters long to notice that something's missing—all the people, for starters. They find a few corpses, but most of the town's inhabitants seem to have vanished without a trace. Many of the few bodies they do find obviously died completely terrified, though just how they died isn't immediately evident.

All the phones are down, but eventually they manage to make a call to the Santa Mira sheriff’s office, which sends up a small group of police officers, who in turn summon an army platoon to investigate the possibility of some kind of chemical warfare. What they find is much worse—an ancient creature that can shape shift into whatever it wants, which has come up to the surface of the Earth to feed and which, thanks to its ability to absorb the thoughts of its victims, believes itself to be the devil. If they can’t find a way to kill it, they’re all going to be lunch sooner or later….

In 1998 it was made into a film starring Peter O'Toole, Rose McGowan, and Ben Affleck.note Who was the bomb in it