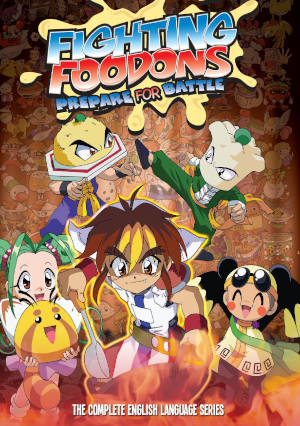 This is really mean cuisine!
"Here's something incredible, these monsters once were edible, so everybody take a look, at combat creatures you can cook!"
Advertisement:

Many years ago, in a far-off kingdom, a king asked of his subjects: "Which is stronger, fried duck or stewed tofu?" Most of his servants thought he'd gone off the deep end, and summarily ignored him. But one mysterious stranger, bearing a magic card known as a "Meal Ticket," understood him completely...and with his magic, he brought the king's dinner to life. They became creatures known as Foodons, and to this day, aspiring chefs work their hardest at preparing the best meals...for battle.

Cut to the present day. Chase and his sister Kayla are the children of the legendary chef, Jack. Unfortunately, it seems like his cooking skills don't necessarily run in the family. Now, a group known as the Gluttons has imprisoned Jack due to his dangerous cooking abilities. After managing to bust his father out from their jail, Chase begins to realize that he has what it takes to be a great chef—so he sets out on his own adventure, even though the Gluttons, especially Perky Female Minion Clawdia, vow revenge.

All of this would probably come across as a horrible rip-off of Pokémon—if the show took itself with an iota of seriousness. Fighting Foodons deliberately plays everything—from the concept to the characters—with as much over-the-topness as possible, making the whole affair come off as parodic. While it was not originally a very big hit, the show gained a cult following over the years for being...well, for being itself, pretty much. Not surprisingly, it uses (and abuses) pretty much every Food Trope in the cookbook.

Originally known as Martial Arts Cooking Legend Bistro-Recipe in Japan, Fighting Foodons was one of 4Kids Entertainment's premiere anime on the Fox Box when they took over Fox Kids. It also spawned several Japan-only video games based on the 2-volume original manga.

The Fighting Foodons give a brief synopsis of the premise.

The Fighting Foodons give a brief synopsis of the premise.