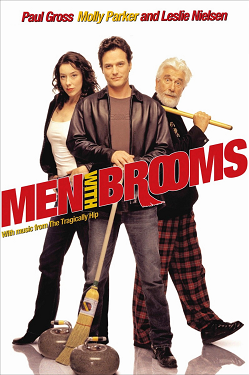 Describe Men With Brooms he-*smacked in the head with a curling stone*
Advertisement:

A 2002 Romantic Comedy movie starring Paul Gross, Molly Parker, and Leslie Nielsen, and seemingly half of the cast of Due South. Chris Cutter, once a local Curling legend until he left town without explanation (not to mention leaving his fiancée at the altar), comes back home for his curling coach's funeral. His curling coach's main wish, according to his will, is for Cutter to bring the old team back together to try and win the Golden Broom, the Curling equivalent to The Stanley Cup, as well as for him to reconcile with his estranged (not to mention strange) dad — famed curling coach Gordon Cutter, played by Leslie Nielsen. Hilarity Ensues.

Followed in 2010 by a one-season TV show sequel of the same name.