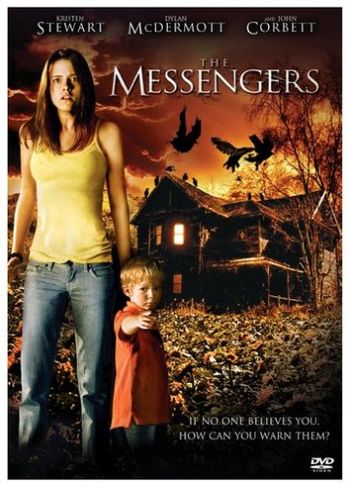 The Messengers is a 2007 horror film starring a then relatively-unknown Kristen Stewart.
Advertisement:

Roy Solomon (Dylan McDermott), his wife Denise (Penelope Ann Miller), their teenage daughter Jessica (Kristen Stewart), and their little son Ben move from Chicago to an old farm in North Dakota. The family is struggling financially because Roy has been unemployed for a long time. There was also a car accident that has caused serious problems for Ben. Roy plants sunflowers and hires the stranger Burwell to help him until the harvest. When Jess sees ghosts and poltergeists in the house, her parents do not believe her. She tries to prove that she is not insane or seeking attention and discovers the fate of the former owners.

The Messengers contains examples of: