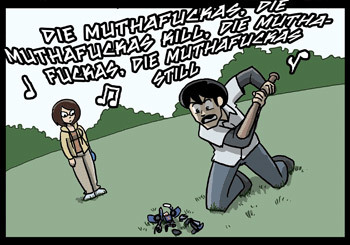 The visceral joy one gets from ruthlessly smashing or otherwise destroying some inanimate object, especially if said object (or whatever it represents) has caused you a great deal of annoyance. Implements favored for this kind of catharsis include, but are not limited to: Baseball Bats, Sledgehammers, Chainsaws, Woodchippers, Heavy Construction Equipment, Clubs, and in some cases High Explosives. As a general rule, the more over the top the means of destruction, the greater the satisfaction.

For obvious reasons, this is rarely something you can do in real life without legal consequences at the least.

Sister trope of Agitated Item Stomping. Ring Ring Crunch is a subtrope. Compare Percussive Therapy when the item being smashed was unrelated to the cause of the rage. Die, Chair, Die! may also be related to this when used as a Catharsis Factor. Not to be confused with Sickening "Crunch!", which involves living beings instead.