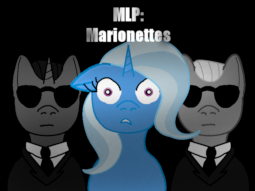 is a My Little Pony: Friendship Is Magic fic written by Godzillawolf

that is now complete. It is set during Season 5, and starts between "The Mane Attraction" and "The Cutie Re-Mark", as Rainbow Dash briefly mentions the Cutie Map and that Starlight Glimmer is still at large, and the group later mentions meeting Countess Coloratura.

Trixie was having the time of her life performing for audiences and putting her past as a bully and braggart behind her. Then one day, she finds herself being pursued by two mysterious ponies in black named Gear Shift and Cover Story, hired by the mysterious Director Masquerade, who seem dedicated to capturing her no matter what the cost. Can Trixie stay free? Or will her pursuers make her a marionette hanging on strings?

This fic contains the following tropes: