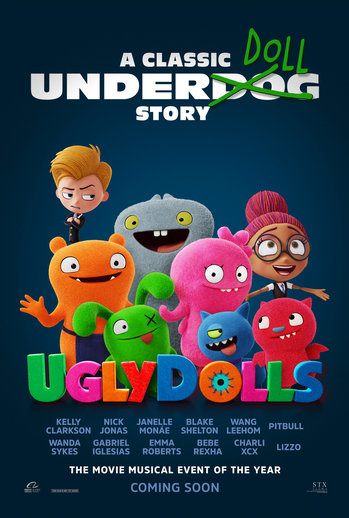 Show 'em what you're made of.
There's a child for every doll
And a doll for every child.
They somehow find each other,
When destiny has smiled.
Who knows just how they're chosen?
The stories seldom say,
It could happen any moment,
And today could be the day...
Advertisement:

Uglydolls is a 2019 animated film, and movie adaptation of the stuffed toy line of the same name. It is the first film in STX Entertainment’s “family and animation” division, with animation provided by Reel FX Creative Studios, along with funding from Alibaba Pictures.

The story takes place in Uglyville, an oddball location where the Uglydolls, a group of various defective dolls scrapped from the production line, live. Moxy (Kelly Clarkson) loves it here, but also wants to know what’s on the other side of the mountain, and also wants to live her dream of finding a human to love her. With her closest friends Wage (Wanda Sykes), Babo (Gabriel Iglesias), Ox (Blake Shelton), Ugly Dog (Pitbull), and Lucky Bat (Wang Leehom), the group find themselves in the town of Perfection.

There, dolls are instructed to be perfect by the town’s leader, Lou (Nick Jonas), giving them their chance of going to the “real world” as the toys for children. It’s here that the Uglydolls realize what it truly means to be unique and different.

A 26 episode animated series on Hulu based on the movie is set to release sometime after the movie, along with the streaming rights of the movie itself.

The movie released on May 3rd, 2019, a week earlier than its planned day of May 10th. The first trailer

premiered on February 5th, 2019, and the third and final trailer

We got our freak flags flying,
Completely unfurled,
And we just couldn't be more on fire!
Is there anything better than this?
No, it couldn't get better than this!
Ox: What's yer name?
Wedgehead: Wedgehead.
Ox: I love literal naming! Isn't that right, Gibberish Cat?
(Cut to Gibberish Cat, who babbles incoherently)
To me, you look okay.
But if you truly want me to,
We'll sculpt and mold,
And change and fix you anyway.
Can someone just hold me?
Don't fix me, don’t try to change a thing
Can someone just know me?
’Cause underneath, I'm broken and it’s beautiful
Feedback

Lou loses the Gauntlet to the UglyDolls, revealing he's a prototype, and snaps.

Lou loses the Gauntlet to the UglyDolls, revealing he's a prototype, and snaps.