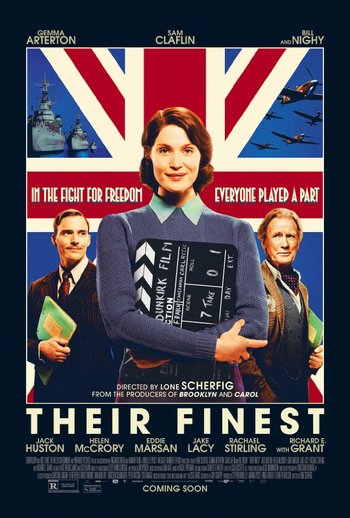 A 2016 film about World War II, adapted from the book Their Finest Hour and a Half by Lissa Evans. The story is based on a real woman who was a scriptwriter (often uncredited) for the Ministry of Information, making propaganda films to boost morale.

Catrin Cole (Gemma Arterton) is a former secretary who took over some writing duties in the Ministry of Information as the men in the department got called up, attracting the notice of the film division with a newspaper cartoon she wrote. The film writers task her with researching the story of two sisters who reportedly piloted their father's boat to Dunkirk and back, in hopes of doing a film of it. Catrin discovers that the boat actually failed before it ever left English waters and the twins, Rose and Lily, are both reticent women under the thumb of an abusive father. But needing the job and not wanting to be sent back to Wales by her struggling artist husband Ellis (Jack Huston), Catrin lies in reporting the account. It nearly gets her fired when discovered, but her male colleagues and her boss argue to make it anyway. She clashes with Tom Buckley (Sam Claflin), another screenwriter who is skeptical about women's value in writing, but they slowly begin to respect and even like one another.

Meanwhile, the actor Ambrose Hilliard (Bill Nighy) argues with his agent over being cast as the drunk uncle, having made his name as the dashing hero in a series of detective films but too arrogant to accept that he's aged out of those roles. When a bombing hits close to him, he accepts the role. As filming commences, the friction between the Ministry people, the crew, and the actors gradually fades and they become close.