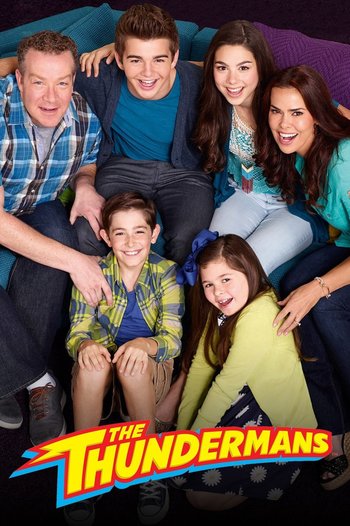 The Thundermans is a live-action comedy based on a suburban family of super humans. The series was created by Jed Spingarn. It debuted on October 14, 2013 on the Nickelodeon network. As of 2016, it became the first live-action series on the network to win a full-order fourth season since iCarly and Big Time Rush.
Advertisement:

The show focuses on a 14 year old set of superhero twins named Phoebe and Max (one a superhero, the other an aspiring supervillain). Together, they learn to get through life with their superhero parents Barb and Hank and three younger siblings Nora, Billy, and Chloe after the family relocates to the town of Hiddenville in order to live a normal life away from the superhero business. The family must learn to fit in with normal human culture while keeping their identities hidden, hence the town name.

In July 2017, it was revealed that the series was cancelled

, ending at four seasons. Remaining episodes were burned off through 2017 up to the start of 2018.

The first scene of the first episode of The Thundermans instroduces the titular superhero family and shows their respective superpowers and personalities.

The first scene of the first episode of The Thundermans instroduces the titular superhero family and shows their respective superpowers and personalities.