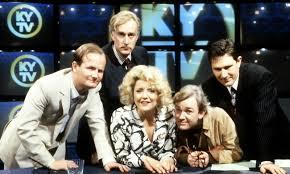 — with four koalas and a tin of greasepaint. But now, here on TV Tropes, we'll have a closer look at the British radio station, Radio Active, along with its spin-off, the highly daring satellite TV station, KYTV.

In the 1980s, commercial radio stations were getting numerous in Britain, creating a bit of competition for old BBC. One such station, however, managed to create a working relationship with BBC, wherein they would "link up" for half an hour every week and be allowed to broadcast their own content to BBC's listeners. This station was Radio Active.

...or at least, that was how they presented the concept. In reality, Radio Active was a weekly comedy sketch program set in a fictional radio station by that name, spoofing commercial radio and various radio tropes. The station was run by people whose sole goal was making money rather than making quality radio, and so the majority of the staff was either hopelessly incompetent, too cynical to care what they actually broadcasted, or both. Each week's broadcast would either be an episode of a regular Radio Active program (a sports program, a talk show, a documentary, a phone-in program) or some special broadcast with a general theme, and would typically feature interviews, commercials, scenery reports and a "hit song" or two (usually parodies of well-known songs or artists), most of it generally screwed up in some way either by the incompetent Radio Active staff themselves or by their even more hopeless guests and interview objects.

Radio Active lasted for seven seasons, from 1981 to 1987, after which it got a reboot and was made into a TV series in 1989 (though the series itself didn't begin airing until 1990) now with the name KYTV. The writers, actors and characters were mostly the same (and indeed many concepts, jokes and even entire scenes of dialogue were taken from Radio Active in largely unaltered form) but the setting was now an incompetent TV station, and the spoof target was satellite TV — most obviously Sky TV, whose name and logo had been ripped off clearly inspired KYTV's. (The title, incidentally, is a pun on KY Jelly... "KY telly," get it?)

KYTV lasted for three seasons (plus one pilot and one Children in Need special) from 1989-93.

Radio Active later on made a surprise return in 2002 with a one-shot special called Digital Turn-On which spoofed digital radio.