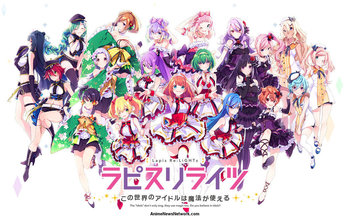 Bringing a whole new meaning to "stage magic".
Lapis Re:LiGHTs (ラピスリライツ) is a multi-media franchise by KLab and the Kadokawa Corporation. It consists of a mobile game, a manga by Hiroichi, and an anime by Yokohama Animation Lab (airing in the Summer 2020 season).
Advertisement:

All three media center on Flora Girls' Academy, which trains witches in magic casting, combat against magical monsters, and performing musical performances called "Orchestras" to gather mana from ordinary people and help power themselves and the world's infrastructure.

The plot of the game involves the Player Character becoming Trapped in Another World and after Director Chloe sees some potential in him gives them a position as a professor in the school. He proceeds to supervise the students' training, handle their equipment, and produce their operas.

The plot of the anime and manga center on newcomer Tiara. She has always dreamed of attending the school as her older sister, Eliza, attended it and was the leader of the internationally-known witch/idol group, Ray. Though Eliza forbade her from doing so, Tiara secretly travels there in the middle of one semester and is allowed to enroll with the permission of the current Director Chloe (who also a former member of Ray and Eliza's right-hand).

Tiara reunites with her childhood friend Rosetta and is added to her group, LiGHTs. Though she is initially happy that her dream has become a reality, she quickly learns that the group is already on the verge of flunking out of school and consequently ending Tiara's dream; undaunted, Tiara does whatever she can to make sure they all get their chance to shine on stage.

If within the US, anime is streaming on Funimation. If within South-East Asia, the anime can be legally watched on YouTube with English or other available language subtitles via Muse Asia.