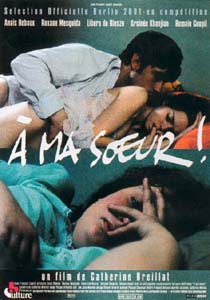 À ma sœur ! (For my Sister!), released in some English-speaking countries as Fat Girl, is a 2001 French drama film directed by Catherine Breillat.

Sisters Anais and Elena Pingot (Anais Reboux and Roxane Mesquida) are on a vacation at the seaside with their mother and workaholic father. Anais is 13 and Elena is 15. Elena is a blossoming beauty, whereas Anais is her chubby kid sister; hence the English title. Elena is sexually active but has not yet lost her virginity, wanting her first time to be with someone who truly loves her. Anais is envious of her sister and longs to have sex herself, but is less of a romantic and claims she wants to lose her virginity to a “nobody” to just get it over with. Anais can only lurk, seething in the background, as Elena carries out a torrid affair with and eventually does lose her virginity to Italian exchange law student Fernando (Libero De Rienzo) in front of her.

The film is notable for its themes of teenage sexuality, graphic sexual scenes (there is one uncensored shot of Fernando putting a condom over his erect penis)note a prosthetic was used, and for its ending: the girls' mother discovers that Elena has had sex and rushes home to have her VD tested. Whilst they are staying the night on the road in their car, a thug breaks in, kills Elena with an axe, strangles the mother, and then pursues Anais into the woods and rapes her. Thus; her desire for sex is fulfilled, albeit through rape and at the cost of the life of the sister she both loved and hated.

Critical consensus would seem to hold that this is Catherine Breillat's best film.