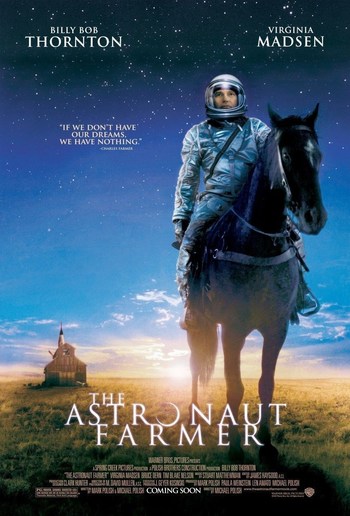 The Astronaut Farmer is a 2006 American drama film directed by Michael Polish, who co-wrote the screenplay with his brother Mark.

The story focuses on Charles Farmer, a former astronaut-in-training who was discharged from the military before he could fulfill his dream of becoming an astronaut. Having missed the opportunity to travel into space, he decides to build a working replica of the Mercury-Atlas rocket in the barn on his secluded ranch in Texas with the ongoing support of his family. When he begins making inquiries about purchasing rocket fuel, the FBI and FAA step in to investigate (and the government officials make endless red tape to stall him beyond his deadline: foreclose on the farm), and the ensuing publicity thrusts Farmer into the spotlight and makes him a media darling.