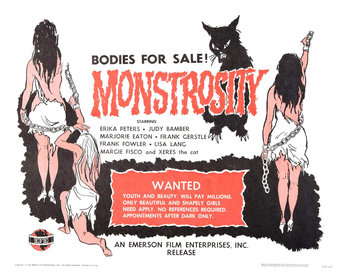 A tasteful poster for a tasteful film.
Advertisement:

Hetty March (Marjorie Eaton) is a rich old lady with plenty of money. With the help of Dr. Otto Frank (Frank Gerstle), a rogue scientist kept on retainer, she intends to have her brain (through the miracle of modern 1963 atomics) transferred into a young body. The body is to be selected from three candidates. Which one will it be? Anita from Mexico, Nina from Austria, or Bea from England? What does her aged companion think of this? Will the scientist be able to gain something from this? And do the three donors suspect what awaits them?

The film was nearly lost following its debut, before being introduced to a whole new generation thanks to Mystery Science Theater 3000. In 2015, a Kickstarter campaign

was launched to remaster the film in 4K resolution and clean up the film artifacts and scratching. The crowdfunding project was successful.