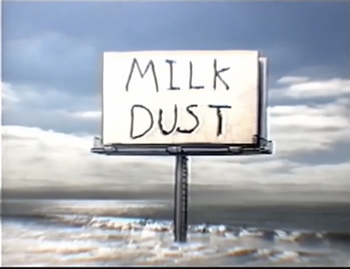 There’s…something I must show you.
Advertisement:

MILK DUST is an animation by Youtube and Newgrounds animator DeadlyComics

. In it, a dinosaur working her shift at a mug shop tells her manager (who is an anthropomorphic cat with a Thousand-Yard Stare, by the way) that she’s going on lunch break. Just as she sets off, she suddenly ends up in her manager’s car, and he gives her a bird. And then it begins.