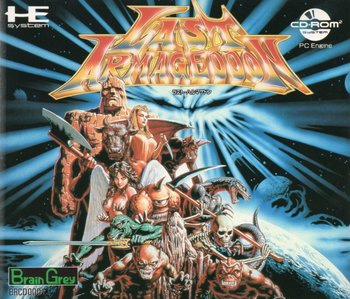 Last Armageddon is a 1988 Japanese RPG developed by Brain Grey for Japanese home computers. It was later ported to PC Engine CD and Famicom in 1990.

After an unknown apocalyptic event wipes out all life on Earth, demonic monsters leave the underworld hoping to take the planet for themselves. However, they encounter unexpected resistance in the form of an army of aliens from a far off planet who have come to claim Earth as a new colony world. The aliens give the monsters an ultimatum: submit or be eradicated. The monsters immediately decide they are having none of this and prepare to take the fight to the aliens. It's then that 108 stone slabs erupt from the earth. Written on them are cryptic messages about humanity's extinction and hints that the truth can be found at the mysterious Tower of No Return.

The monsters assemble a group representing each demonic race - Orc, Harpy, Skeleton, Giant Snake, Gargoyle, Goblin, Cyclops, Slime, Golem, Dragonewt, Minotaur, and Androsphinx. The 12 set off to battle the alien invaders to decide the successor to Earth and to discover the truth behind humanity's destruction.

The game has never been translated or released outside Japan. Brain Grey's dissolution prevented any direct sequels from being made, but developer Pandora Box led by the game's writer later made a Spiritual Successor named After Armageddon Gaiden.