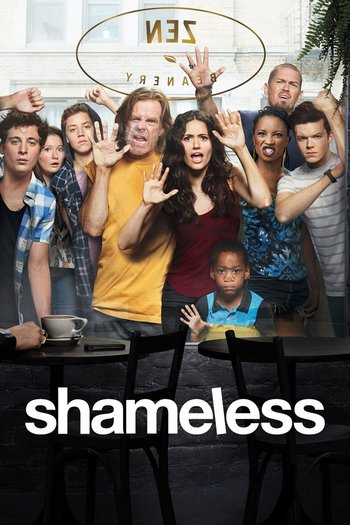 Absolutely, wildly, unapologetically...
"We were living out of a car once. Uncle Nick had kicked us out. We couldn't find anyone else who'd take us in. Lip and Ian and me were sleeping in the backseat when Frank pulled over. Middle of the night. Think it was Halsted. Told me to take the boys and sit on the curb and he'd be right back. I was six. Few hours later, we're still sitting on the sidewalk and Ian's head is burning up. He's hysterical. I don't know what to do. So I ran down the street, Lip under one arm, Ian under the other, trying to flag down help. It would have been easier scoring crack than a ride to the clinic. I finally made it on foot. They said Ian had a fever of 104. Another couple hours later, who knows. I didn't find Frank until a couple days later. First thing he asked me, was how much money I had on me. Wish I could say that was the only time, but it was just the first. My mother is bipolar and my father is an alcoholic and an addict. He takes what he pleases and he offers nothing. No money, no support. I've done what I could to help raise my siblings. I wish I could've done more. I'm not asking for your pity or your admiration. I just want to be able to give these kids everything that they deserve because they're great kids. And they deserve better."
Advertisement:
Or, more succinctly...
"Nobody fucks with the Gallaghers"
— Fiona Gallagher

Based on the British series of the same name, Shameless revolves around the Chicago-based Gallagher family: a clan of poverty-struck misfits constantly finding themselves engaged in rowdy, shameless behavior, usually against their better efforts — or because of them.

Much like their Manchester counterparts, the Chicago-based Gallagher family depicted here consists of:

Among the Loads and Loads of Characters seen on this show, other notable ones include:

Debuting on Showtime in 2011, this version of the show is largely a successful Cultural Translation of the original, maintaining its sense of Gallows Humor dramedy while still changing enough of the concept for American audiences to resonate with. Also boasts a handful of Emmy nominations on its mantel (ironically, none for Emmy Rossum), as well as three Screen Actors Guild wins for William H. Macy's performance as Frank.